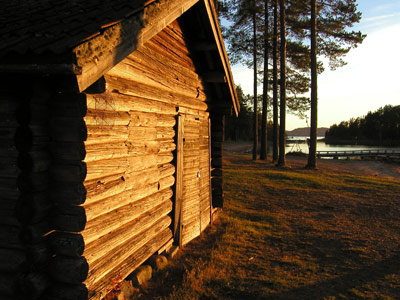 When the Kopparleden first came into use it was frequented by entirely different horse-powered vehicles compared to modern touring motorcycles: These were the ‘foror’ i.e. sleighs driven mainly by farmers (‘forbönder’) earning some extra income during the winter months hauling goods in their horse-drawn sleighs on primitive snow- and ice-covered roads and paths. The copper ore and the mining provided the sustenance for all these transports that carried on for several centuries.

Copper mining in the Falun area started as early as in the 8th century. In 1288, the mine ‘Falu Gruva’ is mentioned for the first time in writing, in a letter from the bishop of Västerås. By the end of the 15th century, as much as 300 tonnes of copper was mined and smelted here every year.

The great era of Falu Gruva took place in the 1600s. There were many jobs around which attracted people to move to Falun, at this time an international city with a population of some 6,000. Sweden’s position as a great power in the 1600s was mainly based on the export of copper from Falun and the copper mine was at times responsible for two thirds of the total global production. In 1650 an all time high was reach, when more than 3 000 tonnes of crude copper was produced from some 90 000 tonnes of rock.

At Midsummer 1687, Falu Gruva collapsed and the 100 metre deep open cast ‘Stora Stöten’ was formed. Miraculously no one was injured since all the employees had the day off. This incident marked the start of a decline for the copper mine but in the 18th century, the master miners bought forest properties and invested in iron production in the area.

Both the copper mining and the production of iron ore required large volumes of wood and the forests around Falun had been depleted at an early stage. The transport of firewood, ore and provisions grew dramatically in volume and the engines were still provided by horses. The farmers/haulers came to take care of the goods and, considering the poor or non-existent roads, most importantly, transports in the wintertime so the sleighs became essential to the functioning of the mines. Eventually the railway took over the transporting from the farmers/haulers in the 19th century and the mining in Falu Gruva continued until 1992.

The Norwegian town Røros became, just like Falun completely dominated by copper mining, although it started at a later point in history. The town was chartered in 1646, following the findings in 1644 of copper ore in the mountains Rauhammeren and Storvola.

At this time, Norway was part of Denmark and Sweden was at war with Denmark, so the Swedes attacked Røros and burnt down the town in 1678 and also in 1679. The entire stock of copper was confiscated. But Røros was rebuilt and in the 1700s, had become the largest copper mine in northern Europe. Due to its strategic situation in the mountains, close to the Swedish border, Røros became an important commercial centre, with hauling farmers running the transports to and from town. The demand for goods and services grew all along what we today call Kopparleden. The master miners in Røros and Falun also exchanged important knowledge.

During the 19th century at the time when Norway was in union with Sweden, the relations between the two countries grew more stable and several of the leading merchants in Røros were of Swedish origin. A customs office opened in the town and large quantities of iron products from Dalarna were imported and sold on for export from Trondheim’s ice-free harbour. By the late 1800s the railway reached Trondheim and steamships started trafficking Lake Femunden. In the winter however, the hauling farmers continued driving their horse-drawn sleighs across the mountains to Røros, actually well into the 1940s. Mining in the so-called Storwartz area carried on in several large and small mines. In 1977 the decision was taken to close down Røros Kobberverks and 333 years of mining history had come to an end.

In 1980 Røros was added to the UNESCO World Heritage List whereas Falun was equally rewarded in 2001. Røros was voted ‘Best destination’ in the 2011 Responsible Tourism Awards. The two towns are twinned since 1940.
The historic importance of Kopparleden still prevails at many of the tourist attractions with connections with mining and commerce. The metal in our modern motorcycles certainly stems from elsewhere but nevertheless, Kopparleden will opened as an international MC route in 2011.